100% Full Power is a transformation-like power-up that can be assumed by certain members of the Frieza Race. As a form that requires tremendous amounts of energy to maintain, it is only used as a last resort, but allows the user to draw out their maximum power and bulk out their muscles, in addition to drastically increasing their resilience and speed.

The 100% Full Power form resembles the user's true form, but is taller and much bulkier in comparison.

Not every member of Frieza's race possesses the ability to go to 100% Full Power, with only Frieza and Frost being confirmed as users. It is very possible, however, that a mutant like Cooler has the potential to do it, seeing as his Fourth Transformation makes him among other things far more muscular than he was before.

Naho Ooishi in an interview for Resurrection ‘F’ stated that Frieza's power has always been in a different league from the rest of his family. Thus it is possible that only a member of the race with an extremely powerful body can handle this level of power in their true form; like the mutant prodigy Frieza. On Namek, at full power, Frieza's power level is 120,000,000; which is much higher than his true form's basic level of power.

Frieza utilizes his 100% Full Power state in order to counter Goku's newly attained Super Saiyan form, allowing him to achieve a level of power capable of matching Goku's for a few minutes before wearing down due to heavy stamina loss. He dropped out of the form after being nearly obliterated by the Angry Kamehameha and surviving the explosion of Namek. Much later, upon his resurrection, Frieza eventually obtained and named his Golden Frieza transformation, rendering his 100% Full Power state mostly obsolete (ironically, the initial Golden Frieza form also had a stamina drawback).

During the Tournament of Power, it was revealed that Frieza still had the capacity of bulking himself up if he wanted, and also that Frost could take on this form as well. However, it was unclear for Frost the extent of the power he could attain with this form, and its power was never seen, as Frieza eliminated him shortly after.

100% Full Power shares almost exactly the same weakness as Super Saiyan Third Grade, being that the increased energy causes the user's muscles to swell to a very large and bulky size. This bulk causes a significant loss of stamina and energy when used for extensive periods of time, and after a while, Goku pointed out that Frieza's energy was getting lower and lower with each hit he landed on Frieza. In addition, sustained damage from before assuming the form can also amplify the stamina decrease, as Goku noted midway through the fight. Despite the drawbacks, unlike Super Saiyan Third Grade and other Power Stressed forms, Frieza was able to retain his speed in this form.

After being resurrected and possessed by Demigra's Dark Magic in the Demon God Demigra Saga during the Demigra Incident in the altered timeline of Age 778, Frieza gains a third stage Villainous Mode enhanced version of his 100% Full Power form where his body turns purplish, his eyes go pure red, and he gains the two black lines that go from the bottom of his eyes to the bottom of his head and emits a dark purple aura. In this form, the drawbacks of his 100% Full Power are removed allowing him strong enough to combat Goku whom had previously absorbed the God's Crimson Radiance of the Super Saiyan God form and the Future Warrior who was at a similar level of strength as Goku though Frieza was aided by the fact he had Super Perfect Cell and Kid Buu (whom had also been resurrected and possessed by Demigra) as allies though despite outnumbering Goku and the Future Warrior three to two, their new Villainous Mode forms combined power was not enough to defeat the combined power of Goku and the Future Warrior thus they were killed once more. Though possessed by Demigra and under his influence, Frieza is completely oblivious to the fact he is being controlled though this is primarily due to him being so focused on taking revenge on Goku. Additionally like all Dark Magic enhancements, it can be removed by giving the user a sound beating.

Frieza can also utilize the weaker second stage Villainous Mode power-up in his 100% Final Form though this is simply a power-up state that can be used in conjunction with his 100% Final Form. Frieza utilized this power-up during his battle with Super Saiyan Goku and the Future Warrior in the altered timeline of Age 762 though at that point he was under the influence of Towa's Dark Magic. 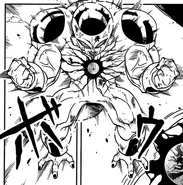 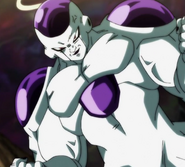 100% Full Power Frieza in the Tournament of Power

100% Full Power Frost in the Tournament of Power