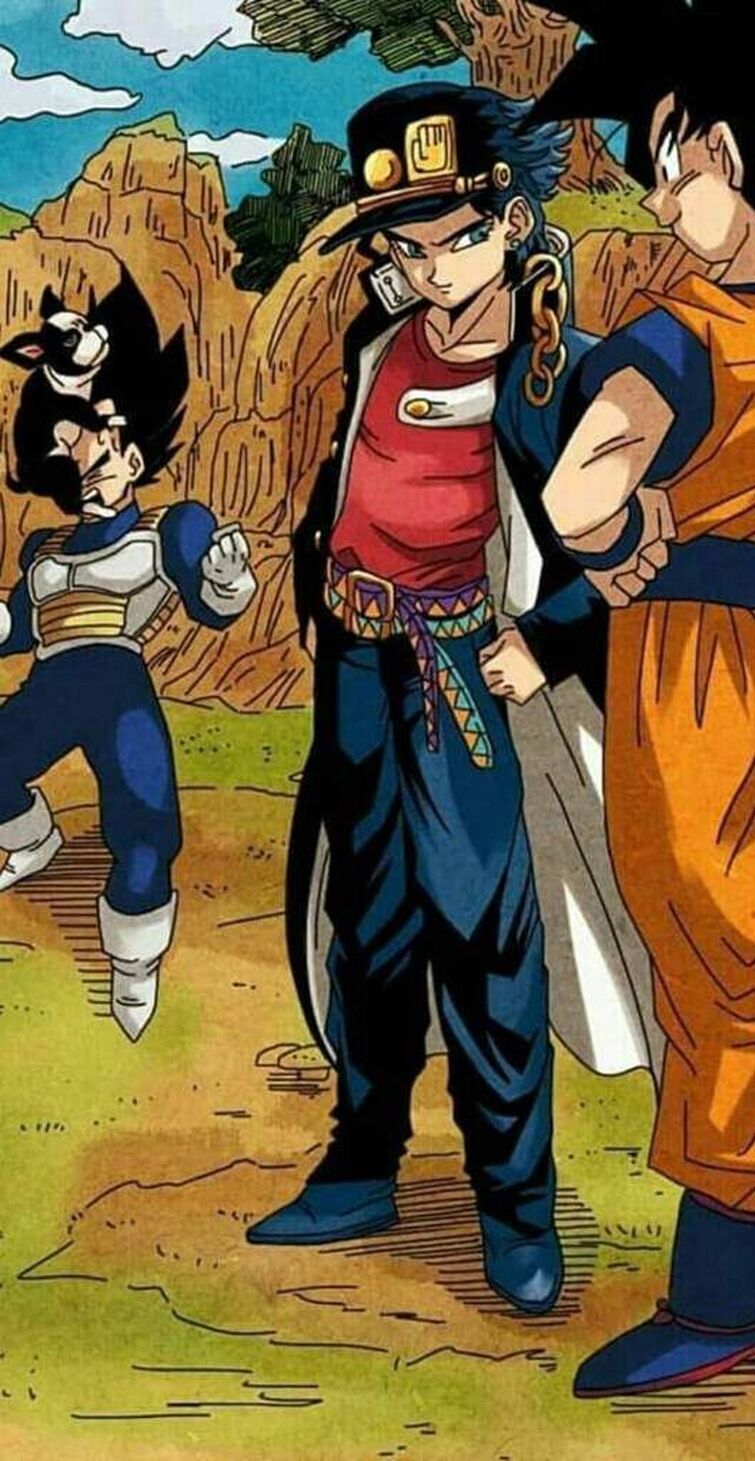 As we all know, it's not uncommon to see Jotaro versus Goku debates. A lot of people say that Goku can defeat Jotaro and Star Platinum, but then again, Goku is Universal in strength currently (Arguably stronger than that still!) But my question isn't exactly IF Star Platinum can beat Goku, but when he was surpassed by Goku. As such, I plan to do a little math to see what the power level of Star Platinum is, using what I believe is his strongest feat in the anime, compared to Dragon Ball's standards of Power Levels. Please stay with me as I continue.

The feat I plan to use is Star Platinum versus the Muda Muda Road Roller. 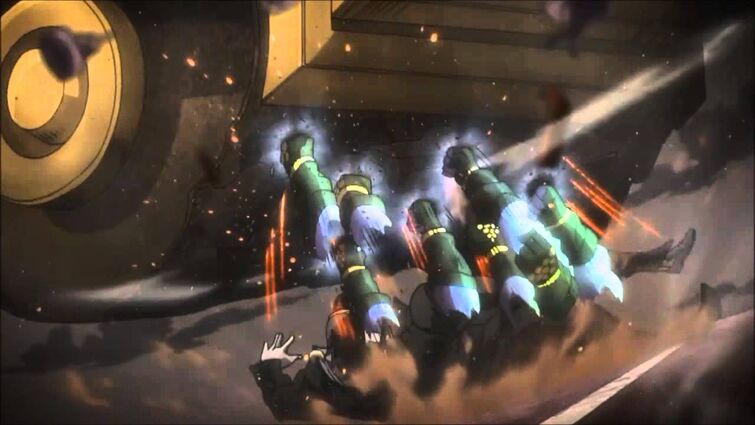 First off, the equation for force is always Mass times Excelleration. So I will do that.

To start with, a normal road roller weighs about 20 US Tons, and in America, a Ton weighs 2000 Pounds. This means that the Muda Muda Road Roller weighs 40,000 Pounds. Then, we also have to take into account DIO's weight, which is 240 Pounds. So the weight of the objects put together is 40,240 Pounds. As an object falls to earth, it's mass is not taken into account, and the maximum velocity for ALL objects is 118 miles per hour. But before we put it all together, we also need to take in one last thing. DIO was carrying the Road Roller on his back, so this means that the force of gravity was being defied. So considering that DIO was pushing it down as he dropped it, Maximum velocity would have been exceeded by enough speed that would have pushed the object up. The weight of keeping it up is equal to the weight of the object, so DIO would have needed 40,240 Pounds of force to keep the Road Roller in the air. So now we can begin multiplication.

As such, this is what the weight of the Road Roller would have been to Star Platinum's arm, and the force that would need to be excluded by Star Platinum to stop it's fall.

Now, on to Dragon Ball equation. The average human has scaled according to Raditz's Scouter as a Power Level of 5. 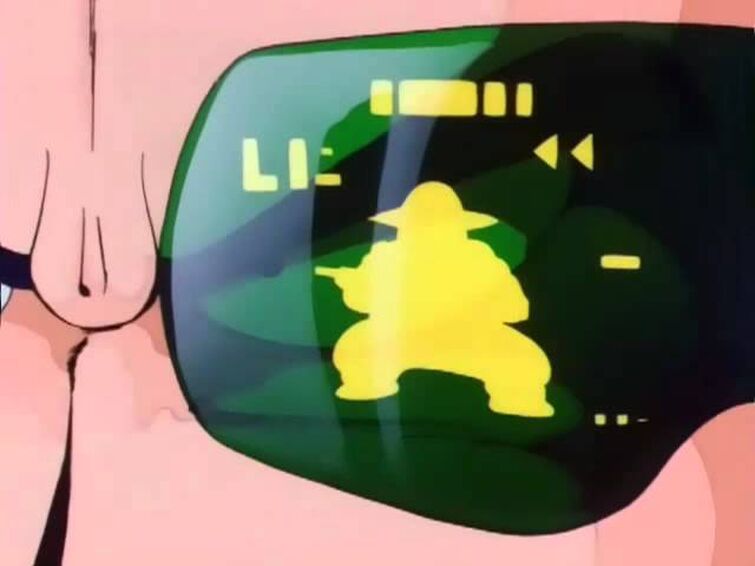 Raditz vs Farmer With The ShotgunYouTube

This means we must multiply the amount of times that Star Platinum is stronger than a human by five, and we'll have his Power Level according to Dragon Ball Logic.

Already this puts Star Platinum beyond Goku on Namek when he was Super Saiyan. There, Goku was 150,000,000 confirmed. From here, he grew all the way to the Cell Saga where we don't get much of a multiplier. However, giving what Cell was, and that Gohan could match it, Goku would be half of what Cell was, and Cell stated that he had enough energy to destroy the solar system.

According to the series it's self, Vegeta claimed to by planetary in canon on earth with a Power Level of 24,000. The Sun makes up most of the mass of the solar system, with, like, 0.2% of it being anything else. Now, all things considered, the sun is bigger than the earth, but it's mass per square inch is lower. In accordance to math from reality, the sun is 333,000X the mass of earth, so Cell Saga Solar Level is 24,000 multiplied by 333,000X

Also, fun fact, according to Dragon Ball's tiering system, Star Platinum has the ability to tank an attack with the ability to destroy 166,500 planets the size of Earth.

So, all in all, Star Platinum has the ability to harm Goku up to the Cell Games, where his Time Stop (Which Goku can't escape at this point in time) would make Star Platinum more than equal.

You heard it here from Ya Boi King Kai. But also, according to Dragon Ball Super's Manga, Vegeta in Super Saiyan at the Tournament of Destroyer's arc, was barely strong enough to lift 1000 Tons. And that was without 2,000,000 pounds... with BOTH hands... and his entire body... And this is post godly training... (DBS Manga' power scale is crap). But according to the math, Star Platinum actually IS strong enough to hurt Goku. So it isn't impossible to defeat him with Star Platinum in Jotaro's Prime, especially with the level of hax abilities such as time stop in the series.

...Or Star Platinum could just stick his hand in Goku's chest and stop his heart. That is a Canonical way Star Platinum can beat Goku... Goku did have heart problems during the Androids arc that almost ended his career for good.

Yes, but he scales to Jiren, who struggled to move in stopped time, and remember that Jiren was using brute force and not speed to warp space and push forward, so MUI Goku's speed doesn't actually come in handy here...

King kai, i think i ruined this place. Im sorry.

Y'all know that according to DBZ logic that 4800 farmers with shotguns could punch the earth and destroy it. 60-ish of them could destroy the moon. Star Platinum's feats are different because his universe is different. The universe he comes from, a Road Roller falling from the sky at maximum velocity could destroy earth in Dragon Ball.

Kinda makes you think how frail the earth is in Dragon Ball.

Well I mean, if we're talking about super Goku here, with brute force I don't think sp could do much. A few bruises here and there perhaps. Now yes, there is the possibility that Jotaro could stop time and faze sp into Goku and destroy a vital organ, but super Goku has already been shown to be unaffected by time related abilities. I can think of 2 examples, both being Hit. 1 is time skip and the other is the time cage Hit used on Jiren. We saw that Goku super saiyan blue kaioken x10 was able to force his way out of Hit's time skip through sheer force. Along with this, Jiren was able to break out of Hit's time cage through brute strength and, if the Goku we're using is the Goku at the end of super onwards, then Mastered ultra instinct Goku could also break out of the time cage with less effort, as we know that MUI Goku surpasses Jiren in brute strength by quite a large margin.

Really all of this is decided whether Goku can or cannot move in time stop. If he can't, he's as good as dead. If he can, Jotaro is most likely as good as dead. I think people are seeming to forget that Jotaro is a normal human, so Goku could just use instant transmission to teleport behind Jotaro and instantly kill him before he even knows what hit him.

But if we're using Jotaro with SPOH... Yeah say goodbye to Goku.

Please refrain from reviving threads that have been inactive for 30 days or more. Thanks!